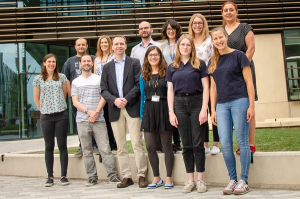 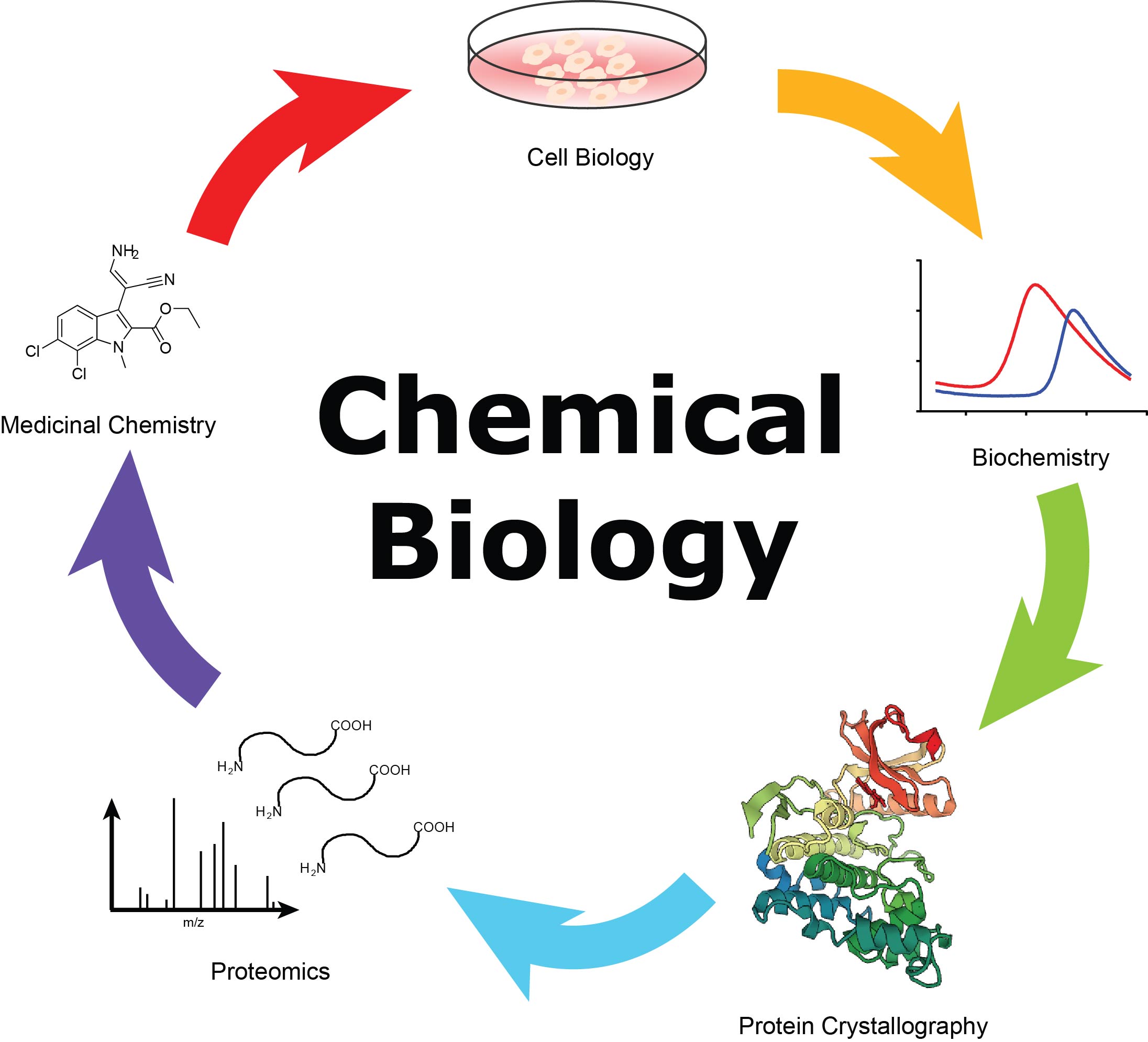 The development of new medicines to treat diseases like cancer or inflammatory disorders is dependent on the identification of novel drug targets. Target selection requires an understanding of the functional relevance of a given protein in both physiological and pathophysiological conditions.

Our group combines chemistry and biology to generate small molecule tools, so-called “chemical probes” that enable studying the role of proteins as potential targets for drug discovery. Candidate targets may originate from genetic studies linking the expression or mutation of a selected gene to a particular disease, in vitro genetic screens such as RNA-interference or genome-editing (e.g. CRISPR, TALEN), compounds identified in phenotypic assays or drugs already in use.

To identify, explore and validate targets the Chemical Biology group uses a variety of different discovery approaches such as small molecule screens, biochemical assays, protein X-ray crystallography, chemical and protein-protein interaction proteomics, medicinal chemistry, RNAi as well as genome-editing alongside classical molecular and cellular biology techniques aiming at the development of new molecules that may provide leads for drug discovery.

Dr Laura Diaz Saez completed her Biochemistry degree at the Autonomous University of Madrid and obtained her PhD from the University of Dundee working on the assessment of potential antibacterial drug targets. She joined the Huber lab to work on the structural and biochemical characterisation of novel targets involved in cancer and inflammatory disorders.

Dr Felix Feyertag completed his Bachelor of Science in Computer Science at the University of Edinburgh. He then pursued education at the University of Manchester, first with a Master of Science in Computational Molecular Biology under supervision of Dr. Simon Whelan, followed by a PhD under supervision of Prof. David Robertson, investigating lentiviruses in the context of host adaptation as well as the emergence of drug resistance. Felix completed a postdoc at the University of Nevada, Reno, under supervision of Dr. David Alvarez-Ponce, using large-scale comparative genomic and bioinformatic approaches to investigate the fundamental causes underlying the evolution of protein-coding genes. Felix joined the Huber lab in 2018 as a bioinformatician employing chemoproteomic and systems biological methods for identifying novel drug targets for multiple myeloma.

Originally from Swansea in Wales, Dr Andrew Lewis graduated with his PhD from the University of Cambridge in 2013 under the supervision of Prof Shankar Balasubramanian. During his PhD he worked on the synthesis and biological understanding of quinone containing natural products and their use as anticancer agents. Prior to this, Andrew read Natural Sciences at St Catharine's College, University of Cambridge completing his MSc with Prof Steven Ley working on the synthesis of novel hydrogen bond organocatalysts. From 2013 to 2016 Andrew worked as a postdoctoral fellow at the University of Toronto with Prof Patrick Gunning working on the design and synthesis of protein-protein interaction inhibitors and using chemical biological techniques to understand their mode of action. In 2016 Andrew joined the Huber group at the Target Discovery Institute where his current research involves the use of chemical biology and chemoproteomic techniques to identify novel drug targets for multiple myeloma.

Originally from France, Dr. Brigitt Raux completed her Master’s degree in Functional and Structural Biology at the University of Toulouse. During her Masters she completed two internships at the Mourey group in the Institute of Pharmacology and Structural Biology in Toulouse (IPBS). Her research focused on the biochemical and structural characterization of two targets involved in the virulence of Mycobacterium tuberculosis. She then worked one year at the EIPL laboratory in Marseille, on the development of inhibitors targeting digestive enzymes implicated in obesity. Brigitt later obtained her PhD in Structural Biochemistry at the University of Aix-Marseille under the supervision of Dr. Xavier Morelli in the Centre of Research in Cancerology of Marseille (CRCM). Here, she worked on the development of potent and selective inhibitors targeting the BET family of Bromodomains. In June 2018, Brigitt joined the Huber group at the Target Discovery Institute where her current research focuses on the structural and biochemical characterisation of novel targets involved in cancer and inflammatory disorders.

Jenny Ward completed her first degree (MChem) in Chemistry at the University of Oxford in 2011, having completed her Masters research in the synthesis and biological evaluation of non-inositol based ligands for the IP3 receptor under the supervision of Dr Stuart Conway. From 2011 to 2016 she undertook an MRes and PhD in Chemical Biology at the ICB-CDT, Imperial College London. Under the supervision of Prof Ed Tate and Prof Eric Lam, her research involved the design and proteomic profiling of activity-based probes for studying cellular ubiquitination machinery. In June 2016 Jenny joined the Huber group at the Target Discovery Institute, where her current research focuses on the chemoproteomic identification of novel drug targets in multiple myeloma.

Jake completed his undergraduate degree in biochemistry at the University in Oxford in 2015, with his Master’s thesis concerning cell signalling in circadian rhythms. He is now working towards his D Phil as a Systems Approaches to Biomedical Sciences (SABS) Doctoral Training Centre student under the joint supervision of Dr Kilian Huber and Prof Angela Russell. Jake’s current work revolves around the development of target deconvolution strategies using chemoproteomics and thermal stability profiling. In addition, Jake is the president of the Oxford University Scientific Society.

Dr Paul Smith completed his PhD in the Department of Biochemistry at the University of Leicester working on characterising the early spliceosomal complexes in the lab of Dr Olga Makarova. He then moved to the lab of Dr Andrey Revyakin making endogenously tagged transcription factors using CRISPR-CAS9 genome editing. Paul joined the Huber group in 2017 to work on CRISPR and genome-editing for drug target validation and cellular target engagement.

Sun Jung completed her degree in Biochemistry at the University of Leicester in 2016. During her final year project, she was investigating the interactions between CSN5 and its binding proteins in the Structural Biology of Cancer-Related Protein Targets group. After graduation, she was part of a disease model development team in Chronos Therapeutics working on drug screening and model validation for motor neuron disease. She joined the Huber group in 2018 and is working on protein production to support biochemical and structural characterisation of novel targets.

Emma Kennedy completed her MSci in Biochemistry at University College London in 2016. During her master's research year, she was working at the Institute of Structural and Molecular Biology (ISMB) in Birkbeck University of London, supervised by Dr Alan Cheung. This project involved understanding regulation and structure of NuA4 histone acetyltransferase enzyme sub-complex Piccolo through protein biochemistry and crystallography. At the Huber group, she is currently working on protein production to support biochemical and structural characterisation of novel targets.