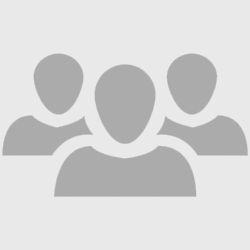 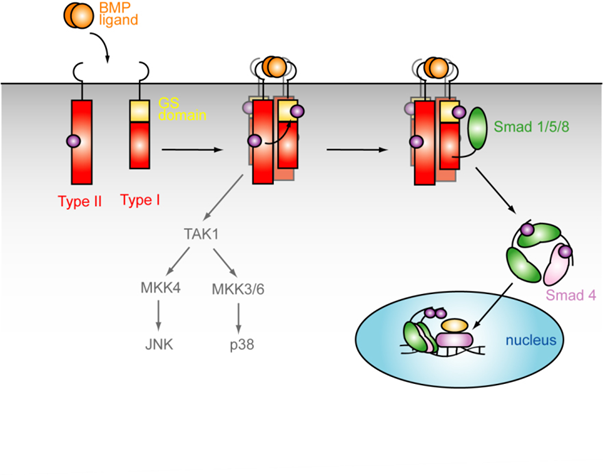 The normal development of our tissues, body shape and size is strictly coordinated.  Secreted growth hormones and cytokines signal between cells to regulate the key physiological processes of growth and differentiation as well as responses to injury and infection.  Inappropriate growth control is a defining feature of human cancer, while excessive cytokine responses also underlie autoimmune and inflammatory diseases, such as rheumatoid arthritis, diabetes and asthma.

The SGC is addressing how growth factor signals are propagated inside the cell by phosphorylation.  Classically, growth factor binding to transmembrane receptors activates receptor and non-receptor protein kinases to create intracellular docking sites for the recruitment of effector proteins that lead to downstream signalling and transcription. We are interested in BMP/TGF-β receptors that control of stem cell fate and tissue morphogenesis. In particular, we are studying gain of function mutations in the BMP receptor ACVR1 that cause fibrodysplasia ossificans progressiva (FOP) and also contribute to the childhood cancer diffuse intrinsic pontine glioma (DIPG). Our work address the structure, regulation and specificity of protein kinases as well as their potential for drug design.

Phosphorylation is a principal control switch for kinase and receptor recognition by E3 ubiquitin ligases.  E3 ligases can direct the internalization or degradation of substrate proteins by the transfer of ubiquitin and thereby suppress the amplitude and duration of growth factor signalling.  Dysregulation of E3 ligases can produce a variety of immune diseases, diabetes and cancer.  However, with some 500 human E3 family members there is still much to understand about their structure, mechanism and specificity. Our work is directed against Cullin-RING E3 ligases, which include the F-box, BTB and SOCS box families.

Dan Pinkas received his PhD in Chemical Engineering with Chaitan Khosla at Stanford University in 2008.  His work there focused on dissecting the molecular basis for Coeliac Disease, an autoimmune disorder triggered by ingestion of certain cereal proteins in genetically susceptible individuals.  It was there that he was introduced to the world of chemical biology and crystallography, developing a chemical probe against the key enzyme involved in Coeliac pathology and using the probe to elucidate a landmark X-ray structure of the enzyme.
After a brief postdoc with Annelise Barron, also at Stanford, where he developed a system for generating collagenous material in E. coli, he joined the lab of Donald Hilvert at the ETH Zurich to work on computationally designed enzymes.  His work there focused on understanding the origins of rate limitations in designed enzymes, using structural biology to inform directed evolution experiments.
Dan joined the SGC in February 2014 working on evaluating novel therapeutic targets involved in inflammation and cancer.

Ellie Williams graduated with an MBiochem in Biochemistry and Molecular Biology from the University of Oxford in 2006 before completing her PhD in structural biology at University College London in 2010, specialising in NMR and ITC. She joined the SGC in 2010 working on the FOP project as a structural biologist and crystallographer. In August 2015 she took on responsibility for the SGC’s public engagement programme and spends her time split between that and her FOP research.

Georgina received her first class undergraduate degree in Medical Biochemistry from the University of Leicester. From there she began a PhD at the Laboratory of Molecular Biology, University of Cambridge under the supervision of Dr KJ Patel, FRS, where she used genetics to study the DNA repair disorder Fanconi Anaemia. She graduated in 2003 and remained as a post-doc within the group until 2005, during which time she published several high profile papers. She then moved to Oxford to work with Prof Ian Hickson, FRS, where she studied the cancer predisposition disorder Bloom’s Syndrome and developed her skills as a biochemist. In 2010, Georgina joined the SGC as a cell biologist where she studies the bone disease Fibrodysplasia Ossificans Progressiva.

Caroline obtained her BSc in Biochemistry from the University of Sussex and joined the SGC in 2009 to begin a DPhil to understand the activation of ACVR1 in the rare bone disease fibrodysplasia ossificans progressiva (FOP). Caroline’s work has led to various structures of the ACVR1 and BMPR1B receptor kinases.

Joshua graduated in Biochemistry and Genome Science at the University of Portsmouth in June 2014. In September 2014 he continued studying at the University of Portsmouth, undertaking a Masters in Research within the Callaghan Lab group. His research focus within this group involved investigating interactions between small molecule metabolites and Ribonuclease enzymes. To study these interactions he used biochemical, biophysical, in silico, and structural techniques, from which he gained a passion for structural biology and drug design.
He joined SGC in October 2015 and is working on proteins involved in cell signalling pathways that have been linked to human disease.

Sarah obtained her BSc from the School of Biology at the University of St Andrews where she undertook research projects on inhibitors of HSP90 and monoamine oxidase. She subsequently won a prestigious NDM Prize DPhil studentship and started her DPhil in Oxford in October 2011. Her work addresses the structure and function of the extended CDK-cyclin family, in particular CDK12 and CDK16.

Zhuoyao is a DPhil student at Oriel College funded by a CSC-NDM studentship. Her research focuses on the study of ubiquitylation by the BTB-Kelch family of Cullin3-dependent E3 ligases. Before her entry into Oxford, she obtained her BSc in Life Sciences at Peking University.