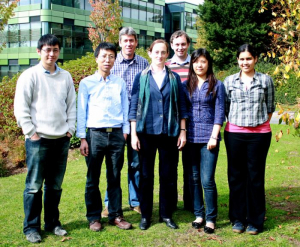 The Integral Membrane Proteins group at the SGC aims to solve structures in human membrane proteins, understand the function and biological role of these proteins and to provide tools such as protein purification protocols, proteins for antibody generation and small molecule probes. 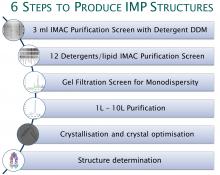 with a series of N- and C-terminal truncation constructs cloned into two expression vectors with TEV cleavable tags. The vectors have either a 6-Histidine tag on the N-terminus or a 10 Histidine and a Flag tag on the C-terminus. For each protein we make a series of N- and C- terminal truncation constructs, usually between 6 and 20 per protein, based on secondary structure, transmembrane helix and disorder prediction, sequence alignments and the literature. These constructs are cloned into  a ligation independant cloning adapted pFastBac vector and bacmids are generated for use as expression vectors in sf9 insect cells. The cloning and screening work is now performed by the SGC's Biotechnology group lead by Dr Nicola Burgess-Brown. 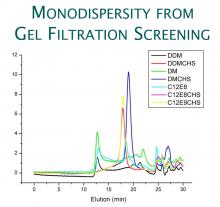 To identify useful constructs we use a small scale purification screening system. This involves extraction of membrane proteins with the detergent DDM, followed by immobilized metal affinity chromatography and gel electrophoresis to identify which constructs are capable of giving soluble protein in the detergent DDM.  Successful constructs are then purified again in a series of detergents and any constructs with a reasonable amount of protein produced are then purified on a larger scale and tested on a gel filtration system with in line light scattering and refractive index monitoring, to find conditions  where the protein gives a symmetrical gel filtration peak, indicating that the protein is monodisperse. Proteins are then scaled up to the 1 to 10 L volumes of insect cells and purified for crystallisation studies using high throughput nanoscale crystallisation systems. Crystals are screened and optimized using the microfocus beam at the Diamond Light Source Ltd. 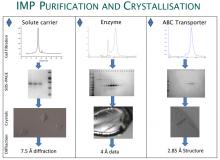 From our initial pipeline of 186 proteins we were able to prepare 24 proteins in sufficient quantity to set up crystallisation trials and three have given crystals (as shown in the figure). These crystals come from proteins from the solute carrier, ABC transporter and enzymes families, suggesting that our methods are generally applicable. For one of these targets we have obtained a crystal structure, with data to 2.85A. 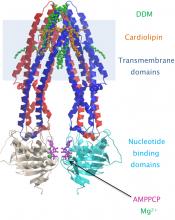 ABCB10 is a mitochondrial transporter which moves its substrate from the mitochondrial matrix into the inter membrane space, across the inner membrane. In common with other ABC transporters it has two nucleotide binding domains (NBDs) which bind and hydrolyse ATP, and two transmembrane domains (TMDs) which form a binding site for the substrate. ABCB10 is a homodimer, having two identical chains with one NBD and one TMD on each chain. In the figure the two blue sections make up one chain, light blue for the NBD and dark blue for the transmembrane section. The second chain is coloured red and pink. We have solved the structure with the ATP analogue AMPPCP and magnesium bound to the NBD, and the resolution of the structure is sufficient to show lipids and detergent molecules associated with the transmembrane helices. Unexpectedly  the structure has an 'open inwards' conformation, rather than an 'open outwards' conformation observed for other ABC transporter/nucleotide complexes.   For more information on the structure of ABCB10, please follow this  link....

Dr Ashley Pike is responsible for the crystallisation and X-ray crystallography of integral membrane proteins at the SGC in Oxford. Following a PhD at the University of Bath with Ravi Acharya, Ashley moved to the York Structural Biology Laboratory to work with Rod Hubbard on the structure determination of human factor VIIa and steroid hormone receptors.  After a brief spell working in Seth Darst's laboratory at Rockefeller University, he returned to York to work on structural aspects of estrogen receptor interaction with nuclear coregulators funded by a Wellcome Trust Career Development Fellowship. Ashley has been at SGC-Oxford since 2006 - initially working as a team leader in the Protein Crystallography group and more recently in the Integral Membrane Protein group.

Dr Andrew Quigley is a post-doc in the IMP group in the SGC in Oxford. Andrew has a BSc in Biochemistry from Warwick University and PhD working with Prof. David Roper on the proteins involved in vancomycin resistance, also the University of Warwick. Andrew joined the SGC in 2009 and has been responsible for purification, crystallisation and functional studies of a variety of membrane proteins. He was also responsible for the work which lead to structures for the extracellular domains of two class B GPCRs and the GPCR binding RAMP proteins.

Dr Yin Yao Dong studied Biochemistry at the University of Warwick and obtained a PhD in Clinical Neuroscience with Prof Karen Morrison at Birmingham University, studying human glutamate transporters. He joined the SGC in 2009 as a post-doc, working on purification, crystallisation and structure/function studies of human membrane proteins.

Dr Chitra Shintre has a degree in Biochemistry with Medical Biochemistry from UMIST and a PhD from the University of Manchester working with Dr Steve Prince and Prof. Bob Ford on structural studies of P-glycoprotein. Chitra joined the SGC in 2010, as a post-doc working on structural studies of ABC transporters. She was responsible for the successful crystallisation and functional studies of the first human membrane protein structure solved at the SGC, the mitochondrial ABC transporter, ABCB10.

Dr Mariana Grieben joined the SGC in May 2012 as a post-doc in the Integral Membrane Proteins Structural Biology group. Mariana has a BSc in Biochemistry from Heinrich-Heine University, Düsseldorf, Germany (2006) and an MSc in Biochemistry, also from Heinrich-Heine University, Düsseldorf (2008).  She has a PhD in Structural Biology from the University of Düsseldorf where she studied the structure of the chloroplastic F1FO ATP synthase from spinach.

Dr Simon Bushell joined the SGC’s Integral Membrane Protein group as a postdoc in 2013. Simon graduated with a BA and B.Sc(Hons) degree, majoring in Biochemistry and Molecular Biology, from Monash University in Melbourne, Australia. In 2008 he completed his PhD with Professor Jamie Rossjohn’s group at Monash, investigating structural aspects of components of the yeast mitochondrial import machinery. After graduating, Simon moved to the UK to work as a Research Fellow with Professor Jim Naismith at the University of St Andrews, Scotland, where he specialised in the crystallography of integral membrane proteins from bacteria. His recent research highlights include the crystal structure of Wzi, the first structure of a prokaryotic integral membrane lectin. Simon is also passionate about communication and engagement with the public and can be found on Twitter at @DrSimonBushell, where he tweets about science, structural biology and other assorted miscellany.

Annamaria Tessitore has joined the IMP group as a Technician in April, 2013, where she is responsible for purification and crystallization of a variety of membrane proteins. Annamaria completed her studies at the Second University of Naples (Italy) with a degree in Biotechnology and with a Master Degree in Medical Biotechnology at the University of Naples “Federico II”, Italy, studying the role of steroid receptors in breast and prostate cancer cells.