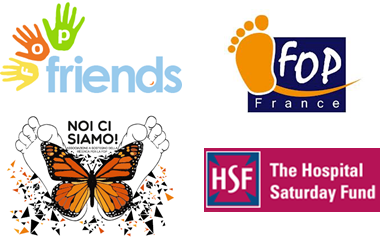 FOP patient groups have announced an extension of their support to the FOP research team in SGC Oxford led by Dr Alex Bullock since 2008. The team, currently comprising two postdoctoral fellows, is working towards developing a treatment for the rare monogenic disease Fibrodysplasia Ossificans Progressiva (FOP), a disorder that causes severely debilitating extraskeletal bone formation and impairs movement.

Oxford researchers were part of an international consortium that discovered the causative gene ACVR1 in 2006. ACVR1 encodes for a BMP receptor serine/threonine kinase (ALK2) that signals through SMAD1/5/8 to regulate body patterning and tissue homeostasis. Single missense mutations cause a gain of function in this pathway, resulting in unwanted bone formation.

Current research efforts in Dr Bullock’s team concentrate on the development of inhibitors of this rogue receptor with the aim of initiating clinical trials.

The UK charity FOP Friends has now agreed to extend its support to the SGC FOP Team into 2017.

FOP Friends director Chris Bedford-Gay said “The amount of progress achieved by the FOP Team at the SGC Oxford is a testament to the power of Open Access science in accelerating critical discoveries”. Being the father of a young FOP patient Chris added “What excites us all at FOP Friends in this partnership is the speed of advancement enabled by modest contributions of a small patient group like us”. Dr Bullock reflects “We at the SGC FOP Team are extremely honoured that Chris and other FOP patients are completely behind our Open Access ethos – this has enabled us to freely share our results and galvanise other scientists to work with us in tackling this challenging condition.”

SGC Oxford has received further donations from FOP France and FOP Switzerland that will support the currents operations. Additionally, The Hospital Saturday Fund has provided funding for the purchase of a Cell Imaging System that will greatly enhance the capabilities of the FOP team’s cellular assays.