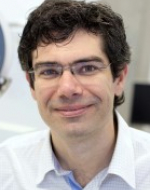 Rafael M. Couñago holds a BSc. in Biology (1997) and an MSc. in Genetics (1999) from UFRJ and a Ph.D. in Biochemistry and Cell Biology (2005) from Rice University (TX-USA). Rafael trained as a post-doctoral scientist at Rice University (2005-07), University of Otago (NZ; 2007-2009) and University of Queensland (AUS; 2009-2012) before joining SGC-UNICAMP in 2015 as a post-doctoral researcher in charge of establishing the laboratory structural biology platform. Since July 2018, Rafael is SGC-UNICAMP Chief Scientific Officer (CSO), where he leads a team of young researchers using molecular, structural and chemical biology tools to investigate the functions and therapeutic potentials of understudied proteins.