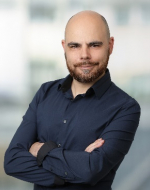 Andreas Krämer graduated with a diploma in Chemistry from the University of Freiburg in 2012. During his PhD thesis at the University of Darmstadt (2013-2017), he focused on structural studies of bacterial members of the histone deacetylase superfamily (HDAC). After completing his PhD, he joined the group led byStefan Knapp at the SGC Frankfurt as a postdoc, where he was funded by the Wellcome Trust, working on the structure-based development of selective and potent CaMK1D kinase inhibitors for the treatment of highly aggressive subtypes of breast cancer. Afterwards he worked at the Frankfurt Cancer Institute (FCI) as a staff scientist where, among other things, he was responsible for developing a comprehensive screening platform for kinases. In the beginning of 2022, Andreas became aprincipal investigato rand is responsible for running the X-ray crystallography facility unit. His current research interests focus primarily on the structural biology of kinases and E3 ligases.