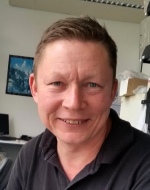 Vladimir Rogov obtained his PhD in thermodynamics of protein folding and protein-protein interactions at the Institute of Protein Research, Pushchino, Russia, in the lab of Peter Privalov (1995). He continued his career as a senior scientist at the same institute and as a visiting researcher at University of Frankfurt, Germany (lab of Heinz Rüterjans, 1997-2004). He joined the lab of Volker Dötsch at the Institute of Biophysical Chemistry in 2004. Since 2010 Vladimir leads a research group studying protein-protein and protein-ligand interactions across autophagy and ubiquitination pathways. His main research interests include the characterization of affinity, specificity and driving forces of interactions between human autophagy modifiers (LC3/GABARAP proteins) and a broad spectrum of LIR-containing proteins/peptides by several biophysical and biochemical methods, as well as structural aspects of these interactions. He is also focused on molecular mechanisms of enhancing/reducing of the interactions affinity and specificity by post-translational modifications.