Protein kinases constitute 1.7% of all genes in human and this large protein family consists of more than 500 diverse family members. Here we will provide an up to date overview of the current status of structural information for human protein kinases and closely related orthologues (>95% sequence identity) that are available in the protein databank (PDB). Currently the PDB contains the structures of 185 unique human protein kinase domain and 197 kinases considering also closely related orthologues available in the PDB.

An Excel spreadsheet showing the list of unique human kinase domain depositions released in the PDB is available here.

An Excel spreadsheet showing the list of kinase domain depositions released in the PDB with sequence identity better than 95%  is available here.

Phylogenetic tree of the kinase family. Kinases with known three dimensional structure that are at least 95% identical to the human reference sequence are highlighted by dots. Structures deposited for the first time by academic structural chemistry laboratories, by industry and by Structural genomics as well as the SGC are shown as red, green, cyan and blue dots, respectively. The tree has been adapted from a phylogenetic analysis by Manning et al. (2002), Science 298:1912-1934. Atypical kinases are not included. During the past 6 years kinase targeted structural genomics has significantly increased the number of novel protein structures and has surpassed published industrial efforts last year. 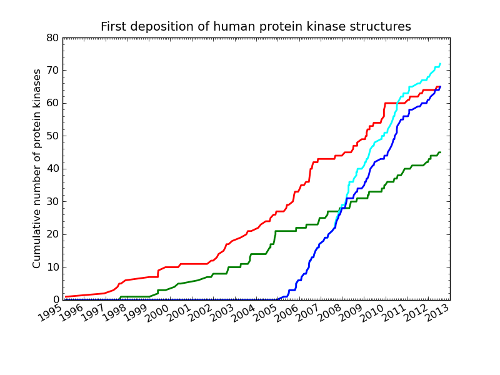 Here, only kinases structures that are at least 95% identical to the human reference sequence and with a resolution of at least 3Å have been considered. 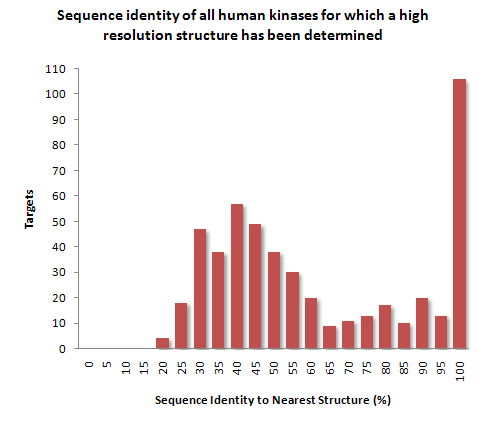