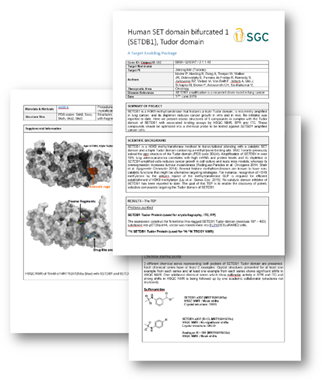 The SGC has released its first set of Target-Enabling Packages (TEPs) to the scientific community.

There is a growing gap between the number of proteins that have been genetically linked to human disease and researchers’ ability to both study the proteins and to understand how the proteins relate to the disease. To address this gap, the SGC is generating and releasing data, assay and informational packages called TEPs to the scientific community.

These TEPs are tailored around understudied proteins, or targets, implicated in human disease and include information about how to make the protein (so scientists can work with it), the three-dimensional structure of the protein, and other enabling assays and tools, including small, drug-like molecules that bind to the protein.

The SGC received a strategic award from Wellcome to develop, make and distribute these TEPs. Initially focusing on proteins implicated in cancer, neuropsychiatric disorders, metabolic and infectious diseases, the SGC has committed to developing and making available 24 TEPs by the middle of 2020.

“Within the SGC, we are de-risking novel targets for drug discovery by crowd-sourcing science using high quality reagents, evaluating novel inhibitors in primary human cells and tissues, and by increasingly concentrating our efforts on new robust genetic insights,” said Chas Bountra, Professor of Translational Medicine in the Nuffield Department of Clinical Medicine at the University of Oxford and Director of SGC Oxford. “We believe that our TEPs will catalyse the generation of clinical candidates and subsequently many more clinical proof-of -concept studies in both academia and industry.

Professor Bountra added, “We hope our efforts will result in at least one new medicine for patients living with a common or rare disease.”

Dr. Tom Collins from the Genetics and Molecular Sciences team at Wellcome said, “By using large-scale genome sequencing researchers now have a wealth of genetic information about which proteins are involved with human disease. What we hope the new data packages will do is help accelerate the translation of genetic information into new therapies and treatments.”

For more information, including downloadable TEP data sheets, interactive visualisations of the protein structure, and other supporting data and figures, visit the SGC website (http://www.thesgc.org/tep).