The Structure-guided Drug Discovery Coalition (SDDC) is an international research coalition led by the Structural Genomics Consortium, based at McGill University, Canada. The mission of the SDDC is to contribute to the global discovery pipeline in tuberculosis and malaria drug discovery by delivering Early Leads to Product Development Partnership (PDP) organisations, MMV and GATB.

Cross-functional, "virtual" teams of academic and industrial scientists work together driven by common interest and expertise

Medicinal Chemistry projects are focussed on the best disease-validated targets only. 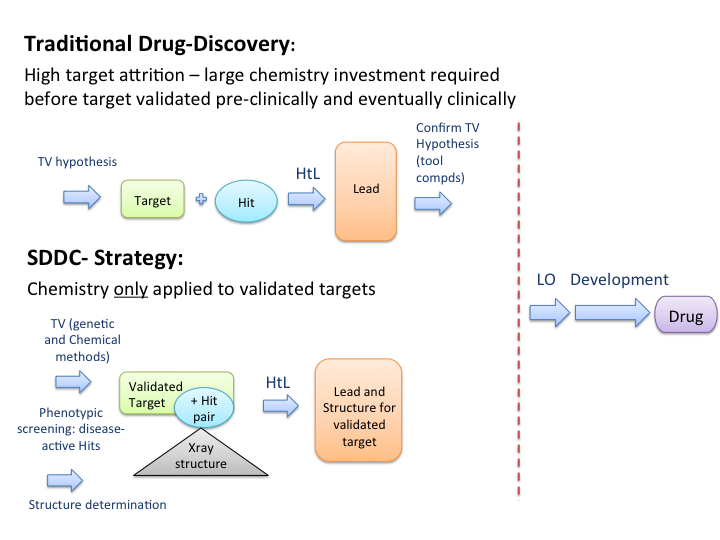 Small-molecule drug-discovery, as typified by pharmaceutical industry practice, is an extremely high-risk, lengthy and expensive enterprise. The attrition rate from the starting of an early Discovery project to a launched drug is in the range of 95-99%, depending on indication. True validation of a target mechanism (eg. protein or pathway with which the drug aims to intervene) can only be proven in Phase II clinical studies and, even then, would-be drugs suffer additional, often non-scientific, hurdles before they can be launched. This is especially the case with drugs for developing-world diseases, where the financial investment, both in launching and maintaining research programs and ultimately bringing a candidate drug through clinical development and to market, is very limited. Such high attrition cannot, therefore, be tolerated.

In a typical pharma Discovery project (most of which are “target-based”), a hypothesis is formulated based on biological and genetic evidence linking modulation of a specific biological process  eg. inhibition of an enzyme to the disease. Typically, evidence that disease activity is truly “on-target” with respect to the proposed mechanism can only be examined once appropriate, highly selective chemical tools have been designed, synthesized and iteratively modified by teams of Medicinal Chemists and biologists working with the studied protein. It is therefore necessary to commit significant chemistry effort “at risk”, potentially for several years, before the target mechanism can be validated preclinically. Even then, a positive Proof of Concept in man is far from guaranteed.

An alternative approach, most common for anti-infectives, is to use compounds (“phenotypic inhibitors”) which have already been shown to be active against the target organism in the living pathogenic cell as chemical leads for improvement by Medicinal Chemistry, towards systemically active Candidate Drugs. This approach, in which structure and activity is not linked to a specific protein target, can cause other difficulties and slow the progress of discovery, not least because of the difficulty of assessing relevant toxicity against host mechanisms and the inability to use structure-guided drug-design to drive Medicinal Chemistry progress.

By coupling the most attractive aspects of the target-based and phenotypic approaches, as well as ensuring that projects are focussed on the most rigorously validated targets, SDDC aims to reduce attrition in preclinical discovery significantly.

Cross-functional, “virtual” teams of academic and industrial scientists work together driven by common interest and expertise 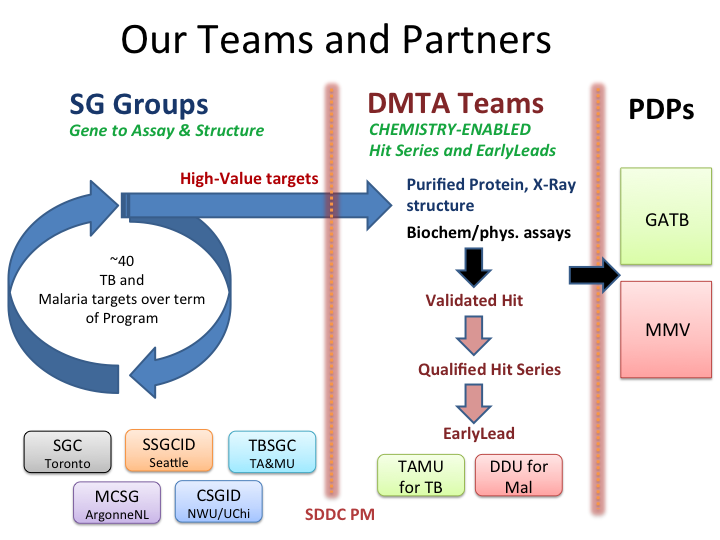 SDDC partners work collaboratively across the globe. Typically not co-located, they collaborate in “virtual teams”, working across geographic boundaries, in both academic and industrial institutions, towards common goals.

How do structures help with Lead Discovery and Optimization?

Each SDDC project has a protein structure of the pathogen and human orthologues as well as co-structures with phenotypically active inhibitors.

Combining the value of structure-guided Medicinal Chemistry with the confidence that the starting hit achieves its disease-relevant effect through interaction with the target, is an especially powerful approach.